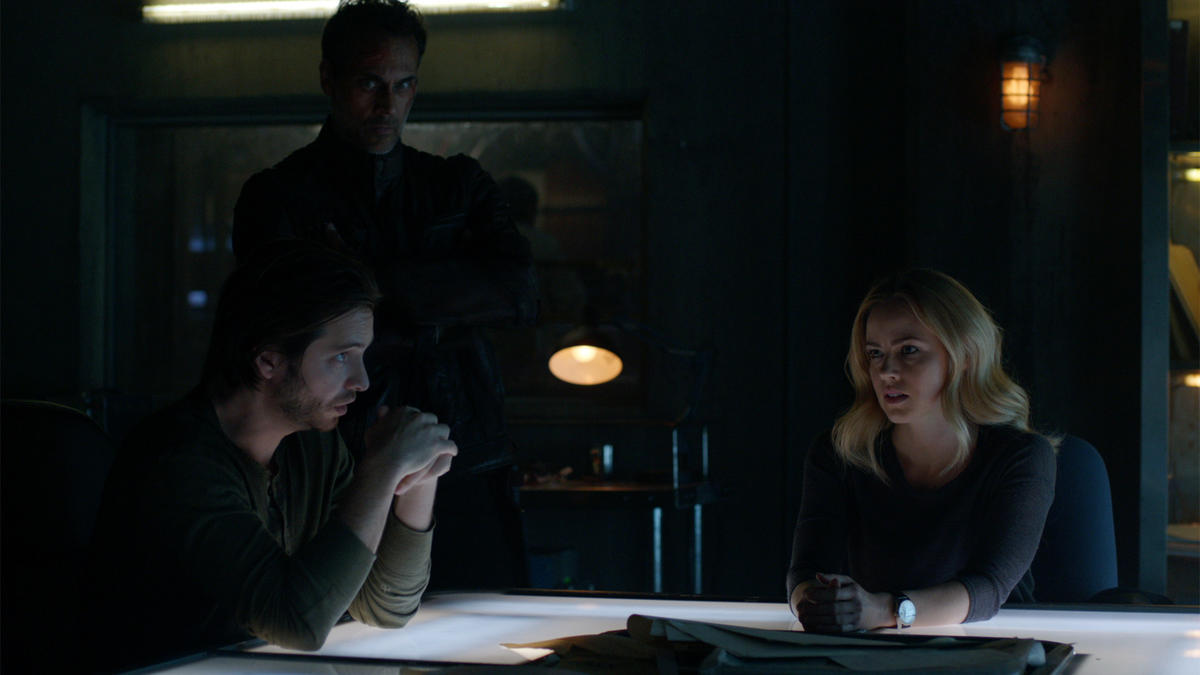 Cole: Thought you were getting some rest.
Cassie: So did I.
Cole: Yeah, it's always tough to sleep after a splinter. Kind of messes with your clock. That's a joke.
Cassie: You ever see weird things when you splinter?
Cole: Yeah, all the time. Colors, lights, memories.
Cassie: You ever see a person?
Cole: Person? No. Who did you see? Listen, this, uh, things with you and Deacon I get it.
Cassie: What?
Cole: I know you guys went through a lot when you first came here, and, uh, I don't have to like the guy to see that he cares about you. I just want you to know doesn't bother me.
Cassie : I didn't think it did.
Cole: Right, II don't even know why I said that.
Cassie: It's okay. I guess we don't really know each other like we used to. 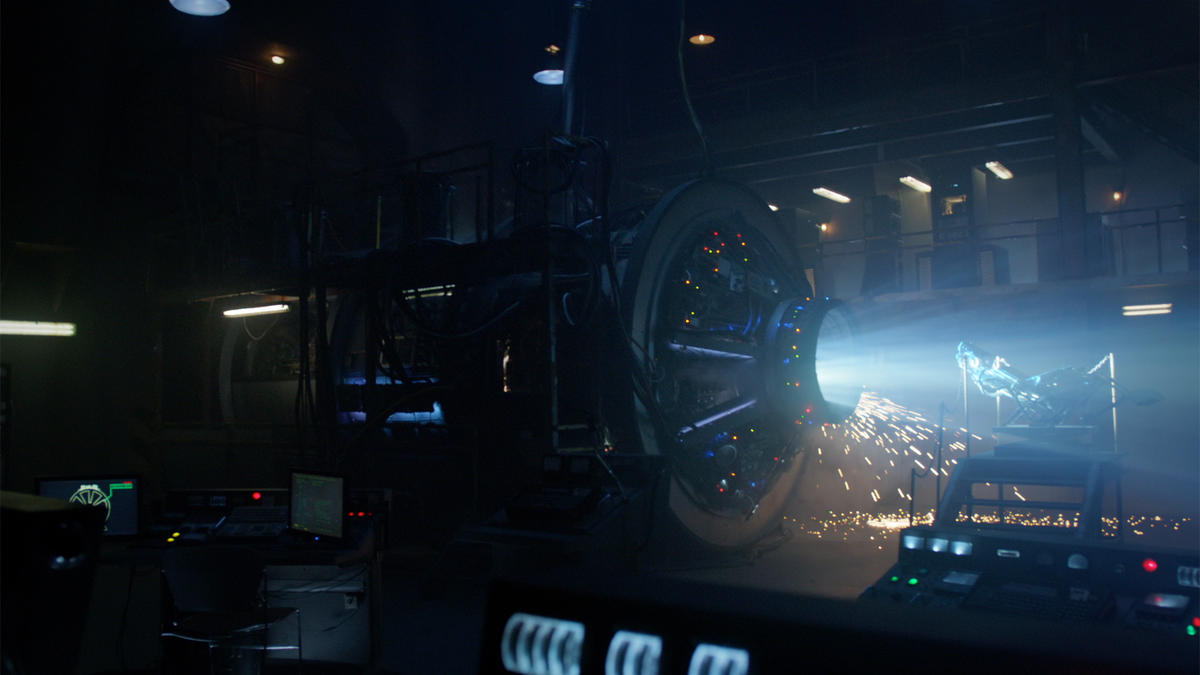 Cole: What the hell is that thing?
Jones: An early volunteer. He called himself Marshal.
Cole: Volunteer?
Jones: A scavenger we put in the machine. A test subject before you. That was five years ago.
Cassie: The machine did that to him?
Before we perfected our tether. He was lost in the time-stream.
Deacon: How is he here?
Jones: This explosion of temporal energy from the machine must have splintered him here.
Cole: Well, if that's the case, what else from the time-stream might be in here with us?

Cole: How do you know it was The Witness?
Cassie: Because I've seen him before. After the Night Room, when they were holding me captive, they had me drink that red tea, and he was there.
Cole: Cass, that stuff's dangerous. What else haven't you told me? Cassie: When I saw The Witness in the hotel room Yeah, when he looked like Aaron? And then he changed his appearance to you.
Cole: To me, why?
Cassie: He was trying to get through to me. Talking about how they could stop death if they destroyed time. And he thought your face would have more of an impact on me. 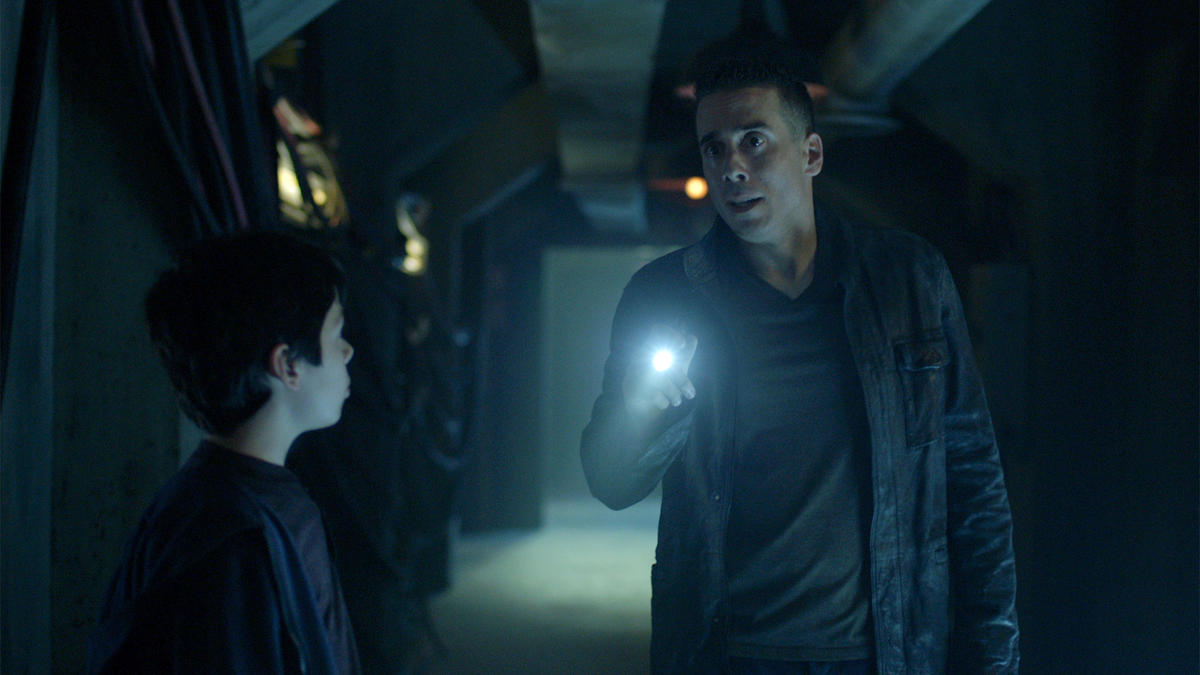 Cole: Ramse, you all right?
Ramse: Sam's gone. I lost him. Goddamn dog attacked me.
Cole:Come on. I lost Cassie too. All kinds of shit roaming the hallways.
Ramse: Where'd they all come from?
Cole: I don't know. The time-stream must have pulled them in.
Ramse: What are you talking about?
Cole: The machine's melting down. We got to make it to the Core, kill the power.
Ramse: Oh, I got to go find Sam.
Cole: Yeah, we're gonna find him. We don't kill the power, this whole place goes up. Him with it. Cassie. Deacon, anybody, over.
Ramse: All right, it's useless. All the temporal bullshit. It's cutting off the signal. Come on. 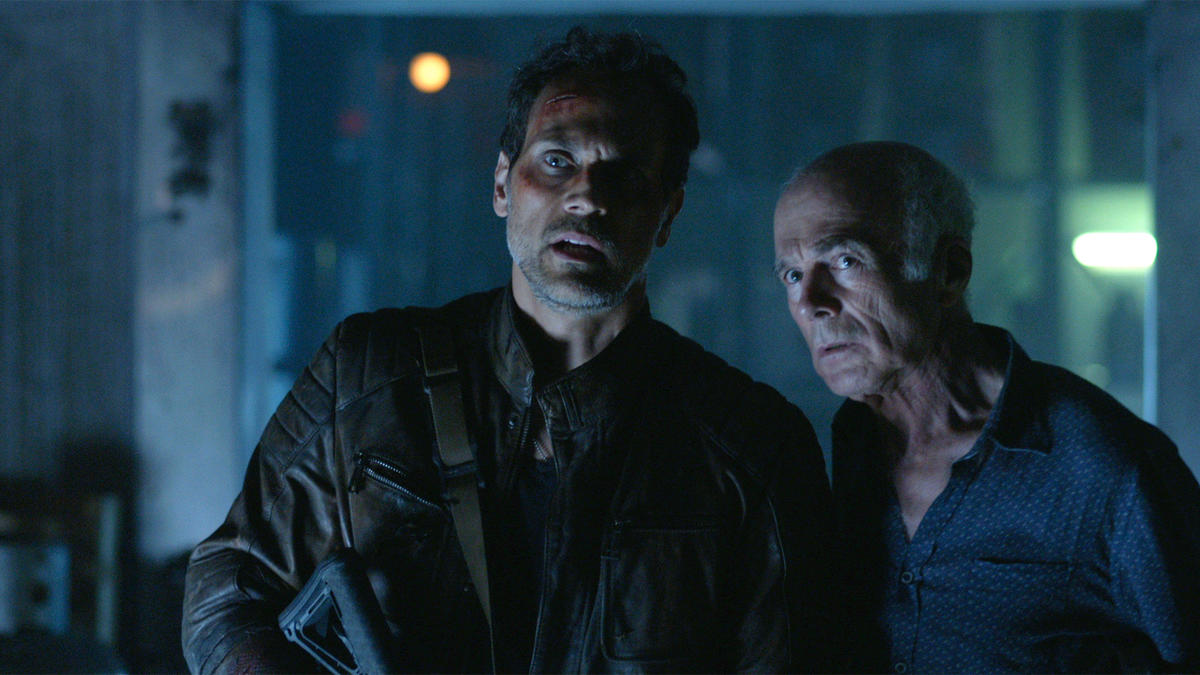 Deacon: Take.Take it.Dies a pacifist or lives a man.
Eckland: Violence doesn't make a man.
Deacon: No, but it's a good way to unmake one. Point and pull and watch for the kick. Don't worry, I'll tell all your hippie friends that you fought them off with flowers and rainbows. Cover me, now! 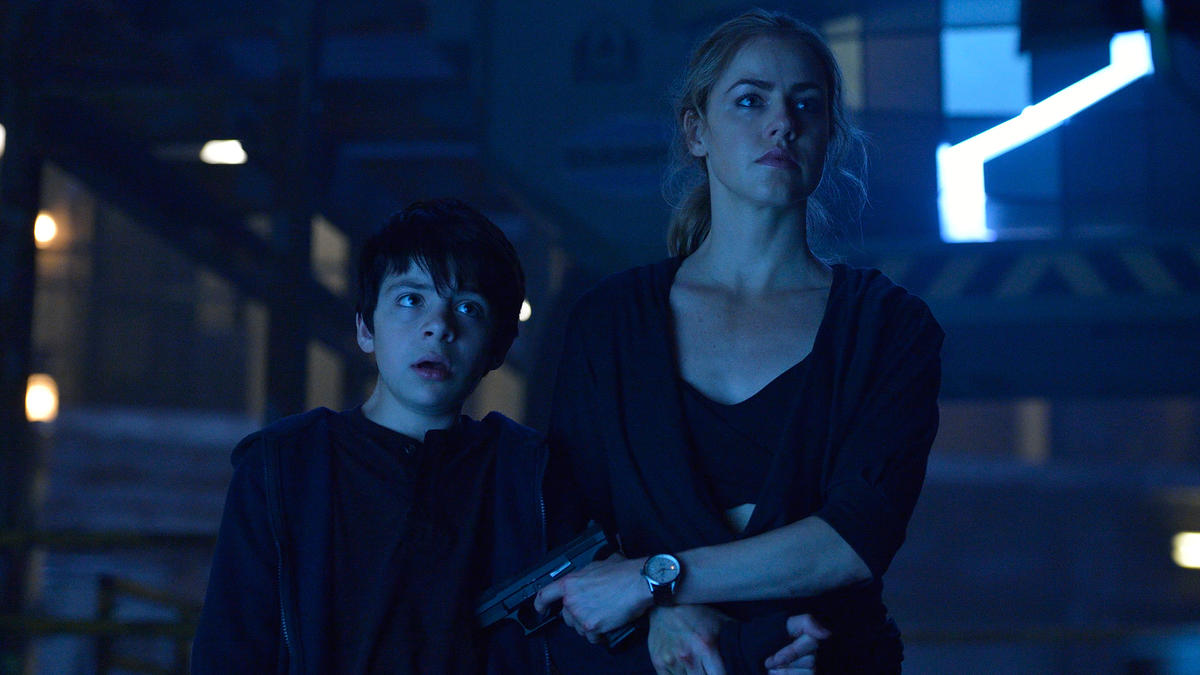 Ramse: She's trying to stop us from shutting down the Core.
What the hell is wrong with her?
Cole: I don't know. I don't know. Jones said something about another tether coming into the facility another time-traveler.
Ramse: Where?
Cole: I think we're looking at him.

Ramse: She's got a gun on my son.
Cole: It's not her. Someone else is in control. It's that other tether. There's someone else in her head.
Ramse: Damn it. 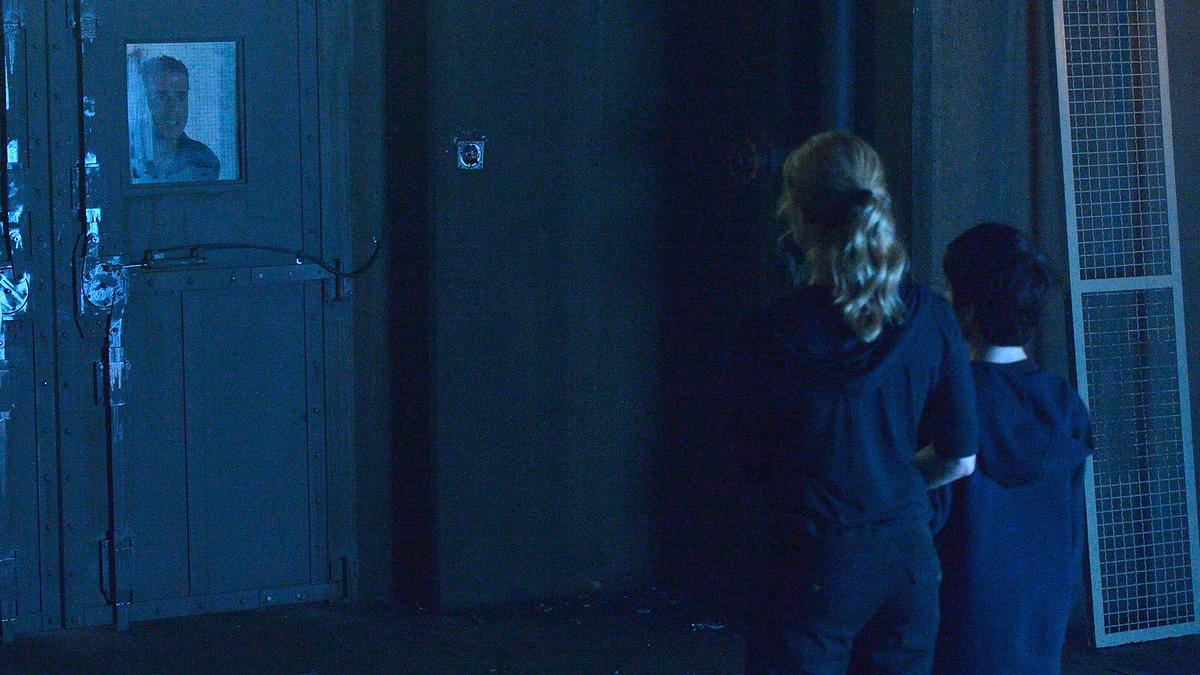 Ramse: Sam? Sam, can you hear me? Everything's gonna be fine. I'm gonna get you out of there.You hear me?
Cole: Cassie, listen to me. You need to open this door. That thing melts down, this whole place is gonna go up. Please.

Ramse: What are you doing? Hey, he's trying to tell us something.What's he saying?
Cole: He's looking at the floor.
Ramse: You're right. The river, good boy. Cole, there's a river beneath us. That's how we can get in.

Ramse: Shit.
Cole: What do you see?
Ramse: Straight down, 50, 60 feet to the river. Still got to figure another way back up.
Cole: Has to be me.
Ramse: That's my son.
Cole: I got a better chance of getting through to her. You know that. You stay here with him where he can see you. Keep him calm. Trust me. 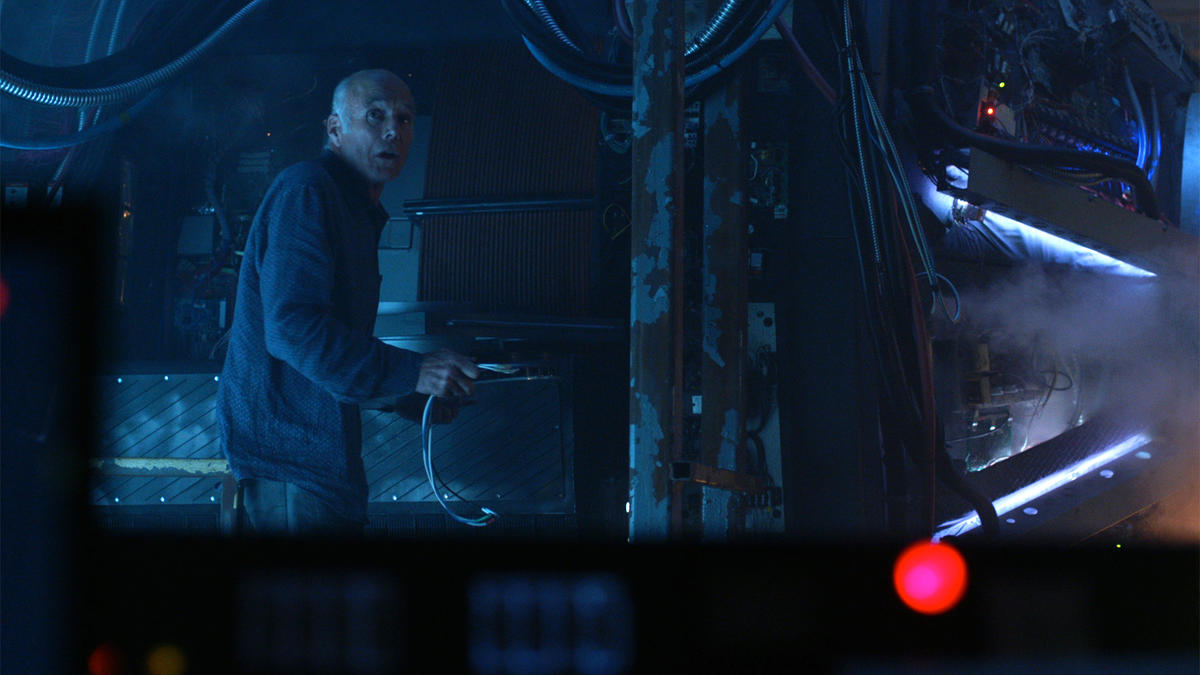 Jones: David! Get back here! Please.
Eckland: Oh, it's not so bad. I dig it actually. Going out in a wild, romantic gesture to a beautiful woman all in the name of love.
Jones: I don't love you.
Eckland: You did once, and that can't be erased.

Cole: Hi, Sam. Just sit tight. She's not gonna hurt you. Are you, Cass? Why don't you put that gun down? Whatever it is they did to you, that's what's causing this. If you can hear me in there, you need to fight. You need to let him go and let me shut down the Core. If you don't, everybody dies. Come on, Cass. I know you're in there. You need to fight, Cassie. You're strong. You can beat this. Come on, Cassie.I know you're in there.

Ramse: What are you doing?
Deacon: Backup plan. You got to get in there and do what needs to be done. 'Cause Cole does not have it in him to stop her. And neither do I.

Cole: Who are you?
Cassie: The forest is red. The grass is tall.
Cole: I'm talking to The Witness, aren't I? Well, it's nice to finally meet you.
So why don't you tell me, asshole, exactly what is it that you've witnessed?
Cassie: The end The beginning.
Ramse: Let him go.
I don't want to have to kill you.
Cole: Ramse, don't.
Ramse: You hurt him, you're dead. Running out of time.

Cole: Cassie, look at me. Come on. Look at me, Cassie! Remember when you said we didn't really know each other anymore? You were wrong about that. The truth is, I don't think anybody's ever known me like you. And I know you. I know you. And I know you would never let me die. Ramse, shoot me. Shoot me! Come on, shoot me. Do it, now!
Cassie: Cole? Cole! 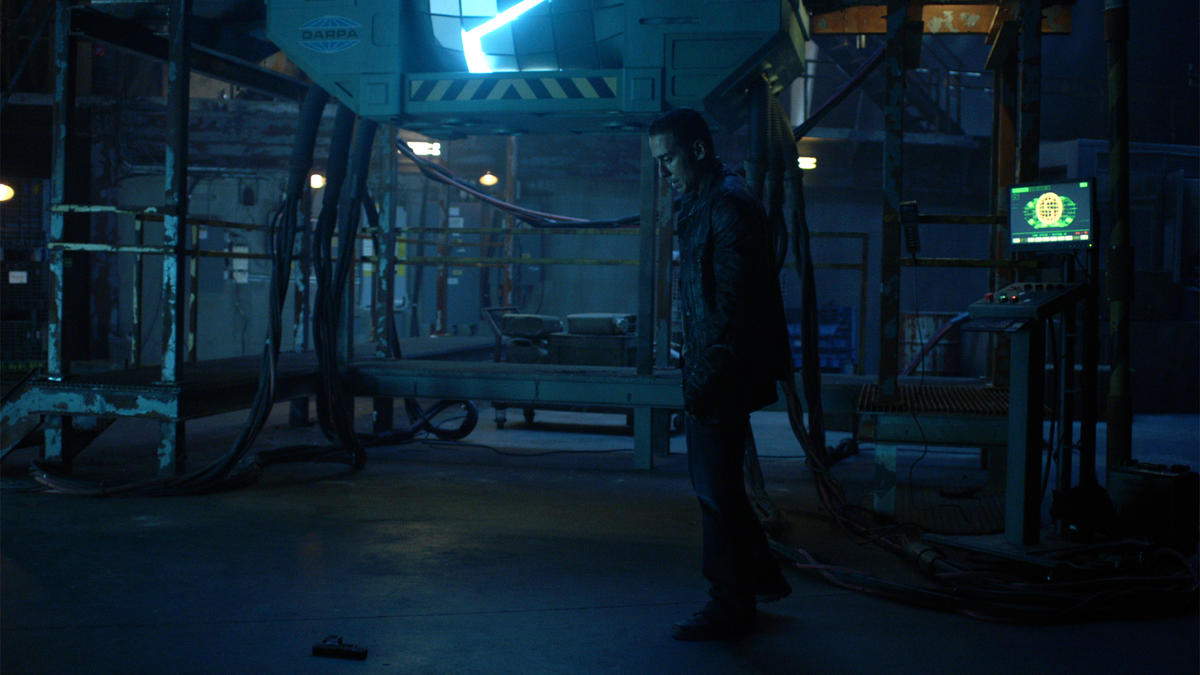 Jones: Ramse
Ramse: Hmm. Is he dead?
Jones: I don't know.
Ramse: Could he survive?
Jones: Unlikely. But maybe you were lost in time once and You found your way home.
Ramse: He was just a boy. He was my boy.

Jones: How's James?
Cassie: He has no major internal injuries.
Jones: With his ability to heal, he should be fine.
Cassie: Katarina, what happened to me?
Jones: The tether we detected was not connected to another time-traveler physically but instead to a consciousness. It was a signal from somewhere in time. And your mind Was the receiver. This is what The Witness did to you. He used you against us. He took control of you to sabotage the machine. I've prepared a series of injections that will purge whatever the 12 Monkeys left in your blood. He won't be able to do this to you again.
Cassie: How can you be sure? This is my fault. Cole Eckland, Sam.
Jones: No it's mine.